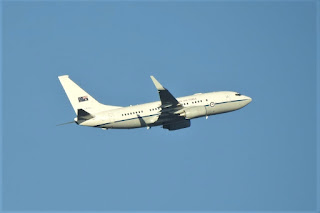 A36-002 was flying as "Envoy 93" and looked to fly up from Canberra to Coffs Harbour and the Gold Coast before then touching down at Hamilton Island Airport. From Hamo, it then flew down to Rockhampton Airport where it remained for a couple of hours.

As shown above, A36-002 "Envoy 93" then departed Rockhampton Airport and flew back directly to Canberra.
Photo taken by John Lee  ©
Posted by Damian F at 9:02 PM