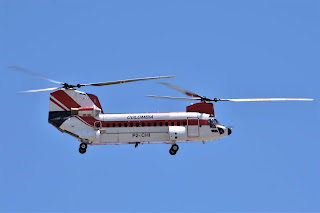 The massive civilian Chinook helicopter had flown into Cairns from Papua New Guinea exactly two weeks ago. With quarantine requirements fulfilled, on Thursday, P2-CHI departed Cairns and took on fuel at Townsville (pictured) before landing at Mackay Airport where it again had a refuel.

It then departed Mackay Airport and headed down to Emerald Airport. At the time of writing, P2-CHI looked to be staying at Emerald Airport for the night.

It has been reported to us that P2-CHI is ultimately heading to Scone where it will join the Australian Aerial Firefighting fleet to support the upcoming bushfire fighting season.

P2-CHI will reportedly take up the radio callsign "Helitack 291".

UPDATE!  On Friday 5 November, P2-CHI continued South from Emerald Airport to Roma Airport and then Moree.  It appears to have arrived into Scone on Saturday 6 November.