On Monday 15 November, Royal Australian Air Force (RAAF) Alenia C-27J Spartan transport aircraft A34-005 was noted completing airwork and landing at a couple of Central Queensland Airports.
It looked to fly up from RAAF Base Amberley and firstly completed airwork before then landing at Bundaberg Airport.  It then flew up to Rockhampton Airport where it again completed airwork before landing again for a short time.
A34-005 then departed Rockhampton Airport and flew West to overhead Emerald and then up to Mackay Airport where it completed yet more airwork.  A34-005 "Kaos 33" then finished the day by landing at Townsville.
The Alenia C-27J Spartan is a military transport aircraft developed and manufactured by Alenia Aermacchi.  The RAAF operates 10 of the C-27J Spartan battlefield airlifter after they were ordered back in May 2012 to replace the now-retired De Havilland DHC-4 Caribou fleet.  The current 10 Spartan aircraft are based at RAAF Base Amberley and operated by 35 Squadron. 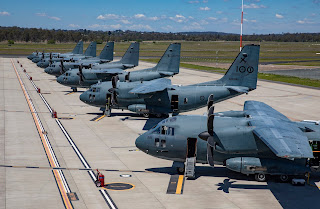 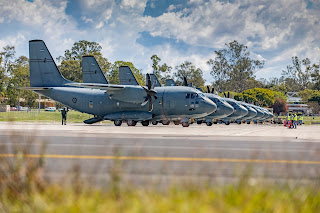 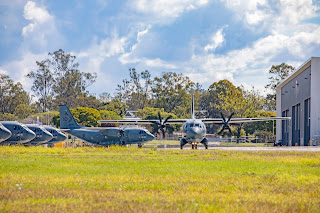 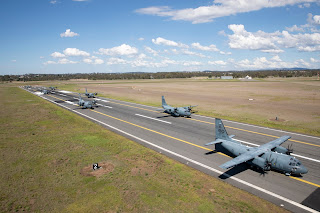 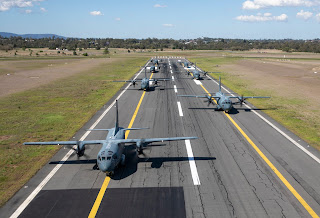 The C-27J Spartan was introduced to RAAF service in 2015, and provides a light tactical airlift between Army rotary-wing and larger Air Force transports. The aircraft has already proven its ability to support Defence, Government, and regional operations, including Humanitarian Assistance and Disaster Relief, engagements with foreign Defence and Government, and maritime surveillance to protect sovereign areas of South Pacific nations.
Photos taken by 'JM' and Defence Images  ©
Posted by Damian F at 9:12 PM