Making a stunning debut into Central Queensland on Monday 20 June was Jetstar Airways Airbus A320 VH-VQM which emerged from the hangar less than a week ago adorned in stickers promoting the new Disney Pixar movie 'Lightyear' - the story of legendary space ranger Buzz Lightyear. 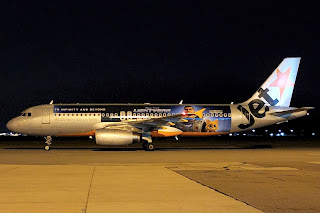 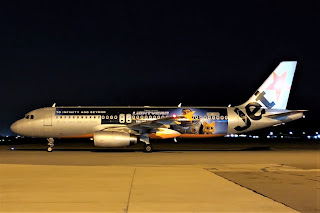 VH-VQM was noted operating the scheduled JST840/1 service to Proserpine (Whitsunday Coast) Airport from and back to Sydney.
Of interest, VH-VQM emerged from the maintenance hangar at Melbourne (Tullamarine) and re-entered service last Thursday 16 June when it flew to Townsville and back - as shown above.
Lightyear is a 2022 American computer-animated science fiction action-adventure film produced by Pixar Animation Studios and distributed by Walt Disney Studios Motion Pictures.  The film is a spin-off of the Toy Story film series, serving as an origin story for the character Buzz Lightyear.
Nice!
All photos taken by 'AC'  ©️
Posted by Damian F at 8:08 PM