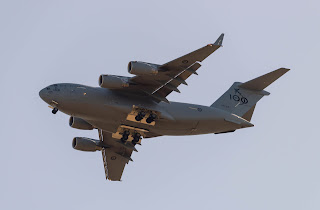 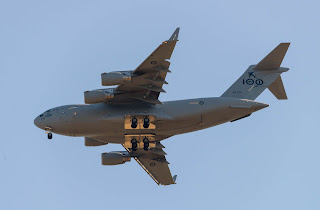 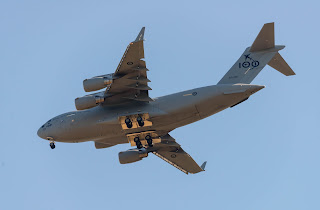 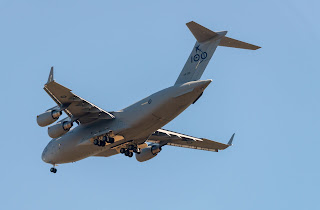 A41-206 was flying as "Stallion 61" and looked to originally depart RAAF Base Amberley and head out over water for air-to-air refueling exercises before it then flew up to Bundaberg Airport where it completed a missed approach.  The Globemaster then flew up to Rockhampton at a fairly low level and was then spotted (above) completing a missed approach at Rockhampton Airport.
A41-206 "Stallion 61" then returned to Amberley.
It seems that it was completing air-to-air refueling exercises with RAAF Airbus A330-200 / KC-30A Multi Role Tanker Transport (MRTT) A39-004 "Dragon 40".
Meanwhile, also on Monday 13 June, Royal Australian Air Force (RAAF) Alenia C-27J Spartan transport aircraft A34-002 was noted completing airwork - and several landings - at Bundaberg Airport.  It looked to fly up from and then return to Amberley.
A34-002 was heard to be flying as "Wallaby 44".
Sincere thanks to local plane spotter Scott H who was at the right place at the right time to capture these great photos!
All photos taken by Scott Harris  ©️
Posted by Damian F at 10:34 PM