On Tuesday 7 June, Royal Australian Air Force (RAAF) Airbus A330-200 / KC-30A Multi Role Tanker Transport (MRTT) A39-004 was spotted as it sat quietly on Gate 6 on Southern end of the Rockhampton Airport parking apron after it had earlier arrived from RAAF Base Amberley as "Dragon 14". 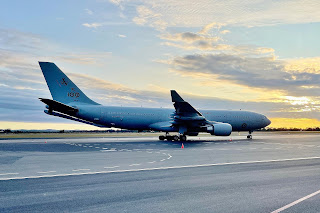 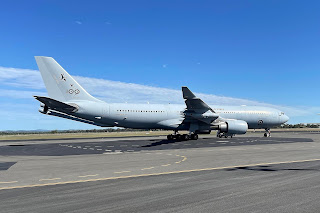 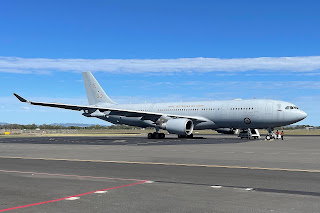 Yet another RAAF KC-30A A39-001 as "Dragon 19" also took off from Amberley just ahead of the other two and flew up to via an inland route to land at Cairns.  It later returned to Amberley via a missed approach at Townsville.
Meanwhile, also on Tuesday 7 June, Royal Australian Air Force (RAAF) Boeing B737-7ES / E-7A Wedgetail Airborne Early Warning & Control (AEW&C) aircraft A30-003 as "Wedgetail 03" was noted completing airwork including missed approaches at Bundaberg and Hervey Bay (Fraser Coast) Airports.  It looked to fly up from and then return to RAAF Base Williamtown.
Nice!
Photos taken by 'IAD'  ©
Posted by Damian F at 8:02 PM