On Wednesday 15 June, Royal Australian Air Force (RAAF) Boeing B737-7DT(BBJ) A36-001 was spotted visiting Gladstone Airport.  As widely reported, Prime Minister Anthony Albanese came to town to host a meeting of Federal Cabinet, as well as participating in other engagements. 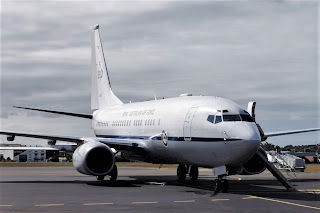 A36-001 was heard to be using the radio callsign "Envoy 73" and looked to arrive from Brisbane and later depart to Canberra.
Meanwhile, also on Wednesday 15 June, RAAF Alenia C-27J Spartan transport aircraft A34-002 as "Kaos 55" flew up from RAAF Base Amberley to complete airwork at Wondai before continuing at low level up to complete more airwork at Bundaberg Airport.  It then flew down to the Sunshine Coast and then back to Amberley.
Photo taken by 'AC'  ©
Posted by Damian F at 8:21 PM