Spotted at the end of last month departing Rockhampton Airport was Royal Flying Doctor Service (RFDS) Hawker Beechcraft B200 King Air VH-FDI "FlyDoc 467" which has now been re-painted into the new RFDS blue and red livery. 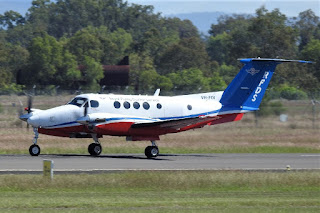 It appears that VH-FDI flew from Brisbane to Redcliffe at the end of March where it was re-painted by the locally-based Flinders Aviation.  It was rolled out and flew back to Brisbane at the start of May and on Friday 5 May, it flew into Bundaberg Airport in its new livery, marking its first visit to Central Queensland.
The RFDS has re-painted five of their older King Air turboprops into their new livery - VH-FDI, VH-FDS, VH-FDG, VH-FDZ and VH-FDM.  Their four recently delivered King Airs - VH-VJW, VH-VJX, VH-VJY and VH-VJZ also wearing the new livery.
Photo taken by John Lee  ©
Posted by Damian F at 7:00 AM