On Thursday 16 June, Royal Australian Air Force (RAAF) Boeing B737-7ES / E-7A Wedgetail Airborne Early Warning & Control (AEW&C) aircraft A30-002 was noted completing a missed approach at Hervey Bay (Fraser Coast) Airport.
It was flying as "Wedgetail 05" and flew up from RAAF Base Williamtown via airwork at Coffs Harbour.  It then landed at RAAF Base Amberley. 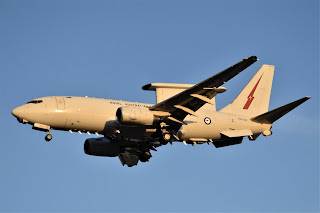 While fellow RAAF Wedgetail A30-003 was noted completing a missed approach at Hamilton Island Airport before later being photographed (above) landed at Townsville.
It was flying as "Wedgetail 04" and also flew up from Williamtown but via airwork at the Sunshine Coast.
Photo taken by Graham Aspinall  ©
Posted by Damian F at 9:01 PM