On Tuesday 23 August, Republic of Singapore Air Force (RSAF) Lockheed C-130H Hercules transport aircraft '733' and '731' were both spotted on the ground at Rockhampton Airport after earlier arriving from Darwin as "SAF9284 Combined". 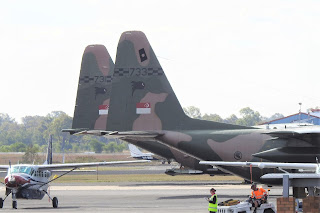 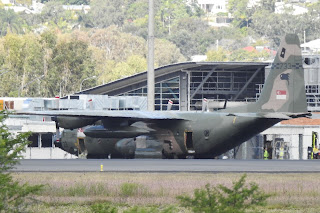 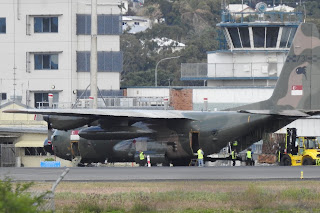 They appear to have brought equipment and personnel for the upcoming Singapore Armed Forces (SAF) Exercise Wallaby 2022 which is due to start in the nearby Shoalwater Bay Training Area (SWBTA) next week.
UPDATE!  On Wednesday 24 August, both Hercs departed Rockhampton Airport for Darwin, flying together once again but this time as "SAF9285 Combined".
Of interest, the Hercs are part of six C-130H aircraft which are flown by the RSAF's 122 Squadron "Condors" based at the Paya Lebar Air Base (PLAB) in Singapore.

The squadron goes by the motto of "Dependable".
Meanwhile, it is expected that Republic of Singapore Air Force (RSAF) Boeing CH-47F Chinook helicopters will deploy from the Oakey Army Aviation Centre, while the Boeing AH-64D Apache helicopters are reported being freighted over from Singapore to Australia via ship.
Heavy jet passenger charter flights are also expected to start next week.
Stay tuned to the CQ Plane Spotting Blog and our Facebook page for all the latest updates and photos!
Sincere thanks to local plane spotter John L for taking the time to capture and send through these great photos!
All photos taken by John Lee  ©
Posted by Damian F at 10:17 PM