On Tuesday 9 August, a great sight for local plane spotters with Canadian registered De Havilland DHC-6-300 Twin Otter C-GSGP spotted soon after it arrived from Mareeba.  At the time of writing it appears that C-GSGP will be staying for at least the night at Mackay Airport. 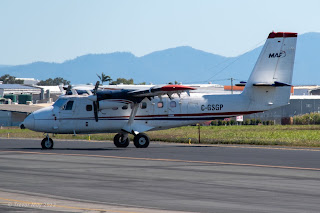 The Twin Otter has only recently entered the Canadian National Aviation Registry as C-GSGP registered to Sander Geophysics Limited of Ottawa.  It had previously been registered to P2-MFB and was operated by the Mission Aviation Fellowship (MAF) in Papua New Guinea. 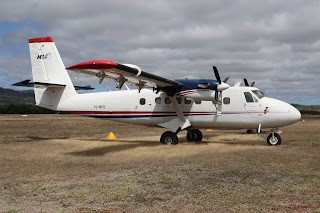 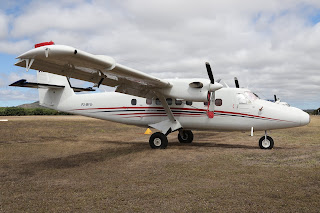 It was one of two Twin Otters (pictured above) that had been put up for sale stored at Mareeba.  The other is DHC-6-200 P2-MFU.
UPDATE!  On Wednesday 10 August, C-GSGP departed Mackay Airport for Toowoomba and Orange in New South Wales.

Meanwhile, also on Tuesday 9 August, a couple of nice corporate bizjets were noted also visiting Mackay Airport.
Recently registered Navair Flight Operations Embraer EMB-500 Phenom 100 VH-HQK visited Mackay Airport from Dubbo.
It appears that VH-HQK was only delivered into Australia via Darwin at the end of July.
While Mitchell Water Cessna 525 Citation M2 bizjet VH-WMY made an early departure for Chinchilla Aerodrome and then Archerfield.  It had arrived the previous day from Melbourne (Moorabbin), Melbourne (Essendon), Miles and Dalby Airports.
And a medical evacuation bizjet in the form of  LifeFlight (Aeromed) Bombardier Challenger 604 bizjet VH-URR "Ambulance 604" visited Longreach Airport, arriving from Townsville and Mount Isa and later departing to Brisbane.
NOTE!  We will now incorporate LifeFlight bizjet visits into these daily digests as opposed to writing a separate post for each visit!

Meanwhile, also on Tuesday 9 August, Southern Air Beech 1900 VH-VSO flew up to Moranbah Airport once again from West Sale and Bourke on its weekly Fly-in Fly-out (FIFO) charter flight.  It later returned down there and ended up at Melbourne (Moorabbin).
DeGunst Transport P/L Textron (Cessna) 208 Caravan VH-NPZ completed its weekly FIFO run from Bundaberg Airport to Nebo Aerodrome, this time with a stop at Mackay Airport.
Seair Pacific / Istlecote Textron Aviation (Cessna) 208B Caravan VH-TQI popped into the Whitsunday Airport at Shute Harbour.  It arrived from Lady Elliot Island and departed to Townsville. 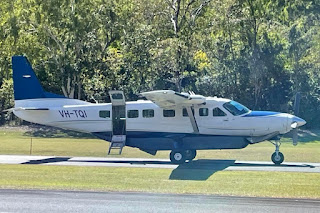 And Brescon (Toowoomba) Beech B200 King Air VH-XDW flew up to Labona also from Wellcamp.  It is due to return to Wellcamp early on Wednesday 10 August.

Finally, also on Tuesday 9 August, Landsur (Landair Surveys) / Inbound Aviation (Victoria) Vulcanair (Partenavia) P.68C VH-OAV was noted completing an aerial survey flight out of and back to Roma Airport as "Survey 24".  It had flown into Roma Airport from Toowoomba over the weekend.
UPDATE!  On Wednesday 10 August, VH-OAV departed Roma Airport for Tyabb.
Photos taken by 'TM', Jonathan Williams and Lee Holloway  ©
Posted by Damian F at 10:20 PM