As well as the dozen or so Skytrans fly-in fly-out (FIFO) charters noted departing Clermont Aerodrome this week, there have been a number of FIFO charter movements in and out of some other Central Queensland airports.

Noted at Moranbah Airport this week were a pair of Seair Cessna 208 Caravan aircraft. VH-OZH was noted on Wednesday 4 April, while VH-LMZ was noted on Thursday 5 April.

At Middlemount Aerodrome on Thursday 5 April were Mackay-based Pilatus PC-12/45 VH-YDO and Australasian Jet Cessna 402 VH-ZME, which both flew from and back to Mackay.

At Clermont Aerodrome - in amongst the Skytrans Dash-8s - was Hinterland Aviation Cessna 208 VH-TFS, which flew in on Thursday 5 April as HND615 from Cairns, before departing using the same flight number to Townsville. Also noted on Thursday was Coastwings brightly coloured Raytheon B300 Super King Air VH-WXC - as shown last year also at Clermont Aerodrome. 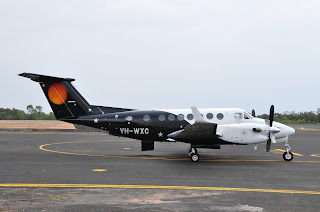