Plenty of Light Aircraft Around Central Queensland Airports This Week

Starting at Mackay Airport, on Tuesday 10 April, Australasian Jet Cessna 402 VH-ZME was noted flying to Middlemount, Redcliffe-based Piper PA-22-160 VH-MBT was noted flying in from the South, while Advance Aviation Beech 58 Baron VH-FLZ and Cessna 210 VH-TQC both arrived from Dysart. On Thursday 12 April, Piper PA-28 VH-KBD and Pilatus PC-12/45 VH-YDO, both flew to Middlemount, with VH-YDO later noted at Emerald as well.

At Gladstone Airport, Cessna 414 VH-SMX of Shadforth's Civil Engineering was noted twice this week transiting from Sunshine Coast to Mackay. Also noted at Gladstone were Beech B200 King Air VH-PWK and Piper PA-31 VH-PJU, which both arrived from and departed to the South on Tuesday 10 April. On Thursday 12 April, Raytheon B300 Super King Air VH-SGQ visited - this aircraft is operated by the Queensland Government.

Rockhampton Airport has had Fugro Spatial Solution's Beech B60 Duke VH-KPB fly sorties out of and back into the airport this week. This aerial survey aircraft is a regular visitor to Central Queensland, and has also been recently noted at Gladstone Airport.


On Thursday 12 April, Clermont Aerodrome was a busy place with as many as seven aircraft movements during the day and evening. KJM Contractors Raytheon B200 VH-KMS popped in twice during the day - both times from Brisbane where it is pictured below. Hinterland Aviation Beech B200 King Air flew a charter from and back to Cairns. And lastly, the four Skytrans fly-in fly-out (FIFO) charters from Brisbane and the Sunshine Coast all arrived in the evening. 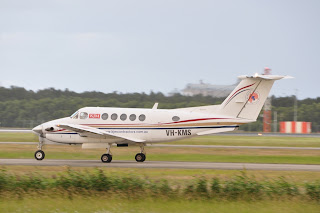 Lastly, Maroochy Air Cessna 182 VH-TOE flew in to both Thangool and Gladstone Airports this week, both times arriving from the Sunshine Coast.
Posted by Damian F at 10:08 AM