What a Week at Gladstone Airport - Topped Off with an American Global Express Bizjet!

Unfortunately, a magnificent week for plane spotting at Gladstone Airport with some great weather and great aircraft visiting, but no Gladstone spotters to take pictures to show for it!

Most of the aircraft details have been mentioned in other posts on the CQ Plane Spotting Blog, but are certainly worth mentioning again! The photos are ones I took while on holiday in Brisbane this week.

On Wednesday 11 April Cessna 182 VH-TOE and Beech 58 Baron VH-KGK were noted. Pionair Australia's Dassault Falcon 50EX VH-FOL popped in for most of the day. In the afternoon, Skytrans Dash-8-300 VH-QQN operated a charter to Gladstone from and back to Brisbane. 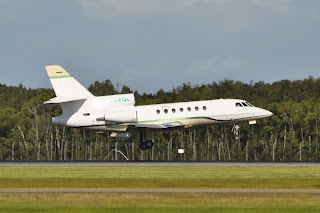 Thursday 12 April saw Cessna 414 VH-SMX return, while Queensland Government Raytheon B300 Super King Air VH-SGQ popped in. The highlight of the afternoon however, was the first visit of Virgin Australia (Alliance Airlines) Fokker F-100 VH-XWN, which operated the DJ1715/1718 service from and back to Brisbane. It is believed that a cancellation to the midday ATR service to Gladstone from Brisbane caused Virgin to utilise the larger equipment in the afternoon. 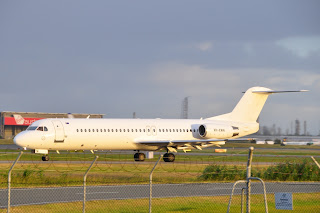 Lastly, on Friday 13 April, a lovely big business jet in the form of Bombardier BD-700-1A11 Global 5000, N50XC, arrived into Gladstone. I believe it departed to Brisbane on Saturday. 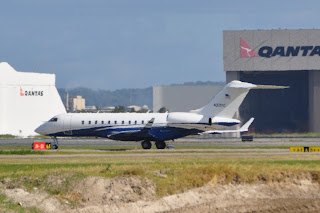