Arriving into Rockhampton Airport early on Monday 17 September were a pair of Seair Cessna 208 Caravans - VH-LMZ and VH-LMD. 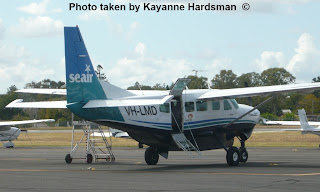 VH-LMD is pictured above parked on the General Aviation apron.  It is notable that this aircraft wears a sticker for Evolution Mining, and so it is presumable that there aircraft were operating a fly-in fly-out (FIFO) charter.

Another Cessna 208 Caravan - VH-DJG - was also noted parked at Rockhampton Airport over the weekend.  The privately owned Caravan is based at Bowenville, and was noted departing North-bound on Saturday 15 September.

Meanwhile, pictured below preparing for departure to Brisbane early on Sunday 16 September is one of QantasLink's recently received new Next Generation Dash-8-Q400 aircraft - VH-LQJ.  VH-LQJ had arrived the night before and departed to Brisbane as QLK2349. 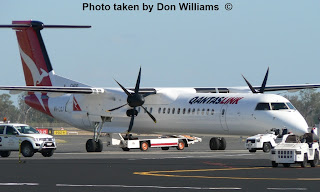 VH-LQJ has also noted at back at Rockhampton, and also at Mackay and Moranbah Airports over the last two days.

****UPDATE!!  QantasLink's other 'new' Next Generation Dash-8-Q400 VH-LQK is expected to arrive into Gladstone Airport late on Monday 17 September and stay overnight.  On Tuesday 18 September, VH-LQK will depart Gladstone for Brisbane, and then fly into Rockhampton Airport as QLK2352, arriving jsut after 9am.
Posted by Damian F at 6:01 PM