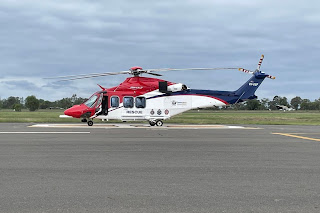 It is assumed that VH-EGF has been at Archerfield for planned maintenance after ferrying South also via Emerald Airport on Thursday 21 April.

As we have mentioned previously, this is all part of the 'rotational system' the service utilises to ensure the even distribution of flying hours on each of the QGAir Rescue helicopters. This system avoids the need to have multiple helicopters offline for simultaneous scheduled maintenance.

Of interest, after arriving into Cairns, it appears that VH-EGF was put straight back in service with it noted completing a medical evacuation flight as “Rescue 510”.