On Thursday 12 May, the Federal election campaign rolled back into Gladstone Airport with Federal Labor Leader Anthony Albanese stopping in for a visit.  He looked to arrive on board Royal Australian Air Force (RAAF) Boeing B737-7DT(BBJ) A36-002 which arrived from Sydney as "Envoy 70". 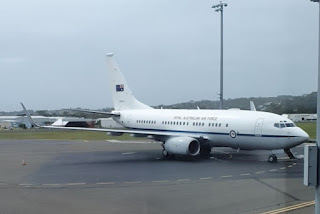 It later departed to Brisbane before then flying up to Cairns.
Joining the RAAF BBJ was Alliance Airlines Fokker F-70 VH-QQY which also called into Gladstone Airport but with the travelling media contingent following Mr Albanese.  VH-QQY also touched down from Brisbane but as "Envoy 40".  It too later departed to Brisbane before also heading up to Cairns.
Meanwhile, also on Thursday 12 May, Federal Government chartered Seidler Properties P/L / Australian Corporate Jet Centres Beech B200 King Air VH-OWN as "Envoy 80" also called into Gladstone Airport.  It looked to arrive from and then later depart back to Canberra.
UPDATE!  On Friday 13 May, VH-OWN "Envoy 80" returned to Gladstone Airport from Canberra via Armidale before then later returning to Canberra.
UPDATE!  After sunset also on Thursday 12 May, RAAF Dassault Falcon 7X bizjet A56-002 "Envoy 53" also looked to arrive into Gladstone Airport but from Cairns and Brisbane.  Then on Friday 13 May, it departed to Darwin before heading to Canberra.
UPDATE!  Also on Friday 13 May, fellow RAAF Dassault Falcon 7X bizjet A56-003 "Envoy 75" also visited Gladstone Airport, arriving from Cairns and later departing to Armidale.
Photo taken by ‘AC’  ©️
Posted by Damian F at 9:54 PM