Interesting to note over the last couple of days that both LifeFlight (ex CareFlight Queensland) (Aeromed) LearJet 45 bizjets have called into Mackay Airport, presumably on med-evac flights. 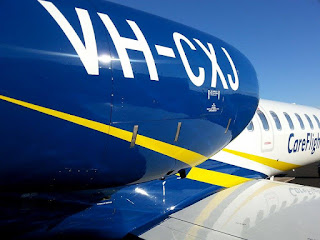 On Wednesday 20 July, VH-VVI "Ambulance 451" arrived into Mackay Airport from Brisbane.  After a couple of hours on the ground, it returned to the capital.

Meanwhile, late on Tuesday 19 July, VH-CXJ "Ambulance 452" also called into Mackay Airport from Brisbane.  After around 30 minutes on the ground, it departed to Townsville.

Of interest, VH-CXJ was also due to Mackay Airport over the weekend on Saturday 16 July but fell victim to the low cloud and rain and diverted to Townsville.

As this is the first post the CQ Plane Spotting Blog (main site) depicting LifeFlight (formerly known at CareFlight), it's worth mentioning that Monday 11 July saw the start of a new chapter in the long and distinguished history of LifeFlight / CareFlight.

Over the past 35 years, they've flown 44,000 critical rescue missions and provided a vital lifeline to people in need across Queensland. Saving lives is truly at the core of what they do every day across their organisation and after much consideration the CareFlight Group decided they needed a new name that reflects this. So from CareFlight will now be known as LifeFlight.

One other interesting (presumably) med-evac visitor to CQ over recent days was the Queensland Government (QGAir) Rescue Bell 412 helicopter VH-ESD "Rescue 521" which visited Bowen Hospital at least three times since the weekend flying from its Townsville Airport base and back to Townsville Hospital.

Finally, it's worth noting a couple of other interesting visitors to Mackay Airport and Hamilton Island Airport this week including New South Wales-based Beech A60 Duke VH-TFD which arrived into Mackay from Roma Airport on Tuesday 19 July.