Operating what looked to be a training flight into Mackay Airport on Tuesday 26 July was LifeFlight (ex Careflight Queensland) (Aeromed) LearJet 45 bizjet VH-CXJ.


It had earlier from Townsville to Cairns and Brisbane before heading back to Townsville via what looked to be a missed approach at Mackay Airport.

Meanwhile, a couple of interesting light General Aviation (GA) aircraft have been noted coming and going from Mackay Airport in recent days with (as mentioned below) Hinterland Aviation Beech B200 VH-HJS calling in from Cairns and departing to Emerald Airport early on Tuesday 26 July as "Hinterland 780".

Also visiting Mackay Airport on Tuesday 26 July was Columbia LC41-550FG VH-LCW which touched down from Archerfield, while locally-based Cessna 206 VH-SMT returned to Mackay Airport from Townsville after heading North on Monday 25 July.

VH-ILG notably suffered a landing gear failure while landing at Mackay Airport in late July 2015.  It came to rest on the main Runway 14/32, sustaining damage to its propeller and underneath section. 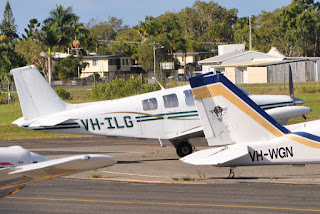 Finally, over the last couple of weeks, Toowoomba Based Piper PA-31-350 Navajo VH-TTX has been noted flying between Toowoomba and Mackay and Bowen Airports.  On Tuesday 26 July, it flew from Bowen to Mackay.
Posted by Damian F at 8:05 PM