Skydive Airlie Beach operated Cessna 182, VH-JOU, has made a forced landing on Shute Harbour Road, Shute Harbour, about 8km East of Airlie Beach, in the Whitsundays, at about 3pm on Monday 6 February. 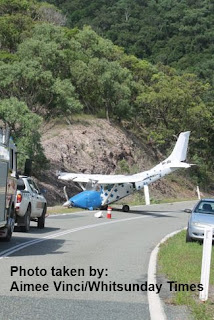 VH-JOU (pictured below at the Whitsunday Airport recently - and featured in a recent Blog Post about the Airport operators - HERE) is one of the familiar sights at the Airport as it operates frequent sorties, dropping groups of keen and eager tourists out over the airport. 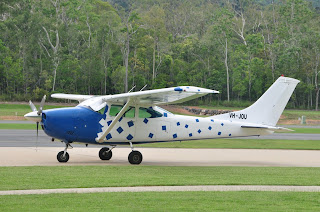 VH-JOU was returning to the Whitsunday Airport (WAVE) from Townsville with one man and a dog on board, when it came down after reportedly running out of fuel.

Whitsunday police have reported that the pilot - a 43-year-old Townsville man - was attempting to land when the aircraft appeared to run out of fuel. The engine reportedly spluttered, before the aircraft lost altitude and clipped a couple of trees. 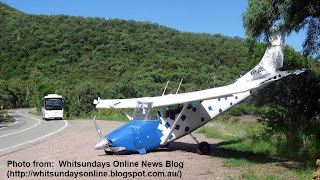 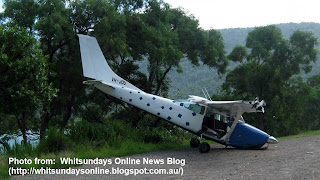 As the Whitsunday News Online Blog pictures show, the aircraft sustained damage to its nose and wing, and Shute Harbour Rd was closed briefly while the aircraft was removed.

The crash of VH-JOU is the second aircraft incident in the area in the past month. On Thursday 19 January, a Bingo 45 ultralight aircraft crashed at Brandy Creek, critically injuring two of its three occupants. 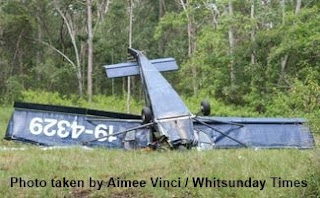 The plane crashed into a clearing on a Brandy Creek property soon after taking off from a nearby private airstrip. See Blog Post HERE.
Posted by Damian F at 1:50 PM