The hangar doors of Emerald Airport-based charter company Advance Aviation were ripped from their hinges last week during one of many storms that have hit Emerald an other parts of Central Queensland over the last week. 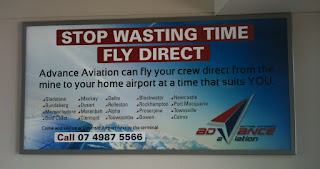 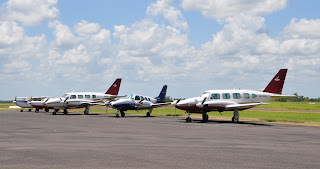 Fortunately, the hangar was unusually empty at the time, with most of the fleet parked well away from the doors (as shown above in a picture from earlier in the year). It is believed severe wind created a vacuum in the hangar, ripping the doors outwards.

Heavy wind and rain have also played havoc with flights to and from Mackay and Proserpine / Whitsunday Coast Airports this week. On Sunday 26 February, a Jetstar flight from Brisbane couldn't land at Mackay Airport, forcing the cancellation of the outbound Mackay flight and causing massive travel disruptions for passengers. While on Monday 27 February, CQ Plane Spotting Blog contributor Adam P was caught up in the disruptions, with his Virgin Australia flight to Proserpine / Whitsunday Coast Airport cancelled in the morning due to the adverse weather conditions in the Whitsundays.

Lastly, a QantasLink flight from Emerald to Brisbane last Monday 20 February was re-directed from Emerald to Rockhampton after the captain became ill. The flight evenutally made it to Brisbane after about a 2-hour delay.
Posted by Damian F at 7:03 AM