Storms have hit several Central Queensland towns late on Tuesday 21 February causing flights to be diverted or even cancelled. Disruptions occured at Emerald Airport and at Rockhampton Airport, where at least three inbound flights were either diverted or forced to return to Brisbane.

Meanwhile, earlier on Tuesday, Alliance Airlines Fokker F-100 VH-XWQ was noted operating into Proserpine / Whitsunday Coast Airport on behalf of Virgin Australia as VOZ1113. This aircraft is still believed to be in Alliance colours, and is believed to be a substitute aircraft for Fokker F-100 VH-XWM which Virgin has been operating, and seemingly had suffered a technical problem. 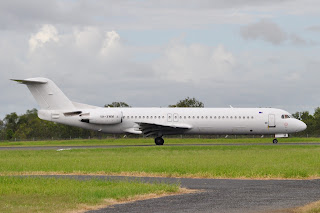 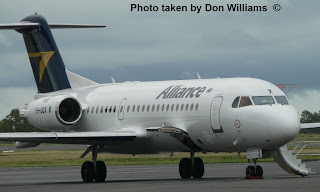 Lastly, on Wednesday 22 February, both Rockhampton and Mackay Airports had first-time visits from a nice new pair of Virgin Australia Boeing B737-800s in the form of VH-YFK and VH-YIF. VH-YIF was operating sectors usually operated by a Fokker F-100 and was thus photographed in Cairns (photo on the Far North Queensland Skies Blog HERE).
Posted by Damian F at 8:17 AM