A search and rescue mission in the region on Saturday 27 June saw Australian Maritime Safety Authority (AMSA) (Cobham SAR Services Pty Ltd) Bombardier CL-600-2B16 Challenger 604 bizjet VH-XND pop into Rockhampton Airport for a short time during the late afternoon.  It was noted flying as "Rescue 660" and had come down from Cairns to coordinate the search which appeared to be off the coast South of Gladstone. 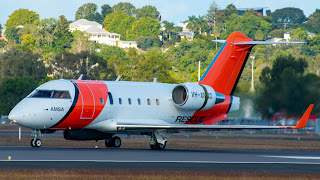 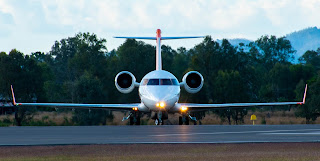 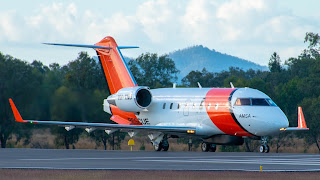 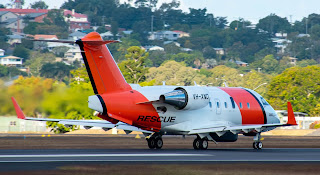 After refuelling, VH-XND "Rescue 660" is pictured departing Rockhampton Airport for the search zone.  It eventually returned to Cairns.

Of interest, three helicopters that were noted also participating in the search and rescue mission included LifeFlight Rescue Bell 412EP VH-XCY as "Rescue 522" and a pair of McDermott Aviation / Heli-Lift Australia Aerospatiale / Eurocopter AS365 Dauphin helicopters N38MD and N365JL.  All three choppers looked to stage out of Bundaberg Airport.

Finally, also on Saturday 27 June, it appeared that Surveillance Australia / Australian Border Force (ABF) Cobham Aviation-operated Dash-8-200 VH-ZZC "Borderforce 33" was inbound to Rockhampton Airport at the completion of a sortie.

All photos taken by Michael Malick  ©
Posted by Damian F at 8:42 PM