Cessna 208 Caravans VH-NPZ and VH-TLH Both Spotted at Rockhampton Airport - Plus More!

On Sunday 18 September, local plane spotter Trevor H popped out to Rockhampton Airport and was able to photograph a couple of visiting and resident Cessna 208 Caravans all parked at the General Aviation (GA) Apron. 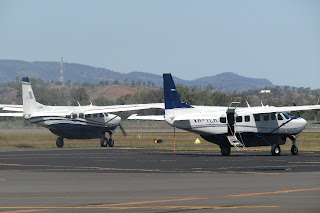 DeGunst Transport P/L Textron (Cessna) 208 Caravan VH-NPZ arrived into Rockhampton from its Bundaberg Airport base via North Curtis Island before then departing back to those places. 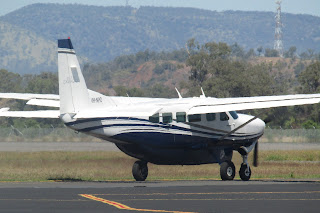 While Seair Pacific / Istlecote Textron Aviation (Cessna) 208B Caravan VH-TLH arrived into Rockhampton Airport from Longreach Airport and then departed to Lady Elliot Island and the Gold Coast.  It had departed from the Goldie on a closed tourist charter flight on Friday. 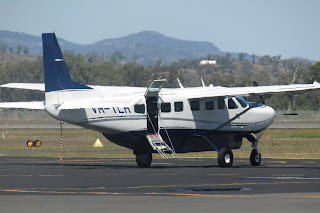 And the 'resident' Hinterland Aviation Cessna 208 Caravans - in this case VH-MRZ and VH-TFS - have been moved to operate from the GA Apron at Rockhampton Airport while the Northern Hardstand parking area is being used by the Republic of Singapore Air Force aircraft and helicopters during the Singapore Armed Forces Exercise Wallaby 2022. 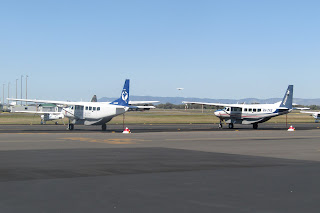 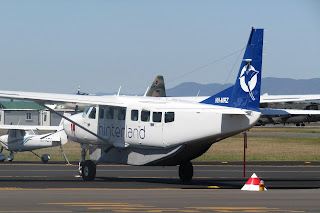 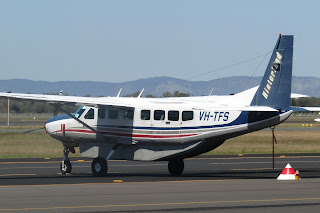 Meanwhile, also on Sunday 18 September, Brisbane-based Hewitt Cattle Australia P/L SOCATA TBM 700 VH-PGA called into Moura Aerodrome while returning from the Northern Territory to Archerfield.  It had flown out there via Blackall Airport the previous day.
And Nebrean P/L Hawker Beechcraft B200GT Super King Air 250 VH-JHP flew up to Hamilton Island Airport from Toowoomba via Chinchilla Aerodrome before later returning directly to Toowoomba.
Finally, also on Sunday 18 September, Mitchell Water Cessna 525 Citation M2 bizjet VH-WMY looked to fly up from Melbourne (Essendon) to Chinchilla and then Miles Airports before later flying down to Melbourne (Moorabbin).
Sincere thanks to local plane spotter Trevor H for taking the time to capture and send through these great photos!
All photos taken by Trevor Hardsman  ©
Posted by Damian F at 10:51 PM