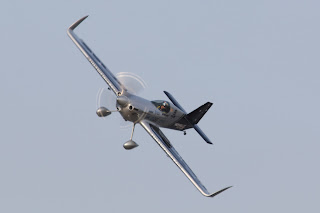 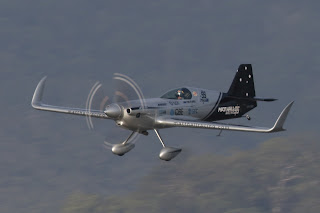 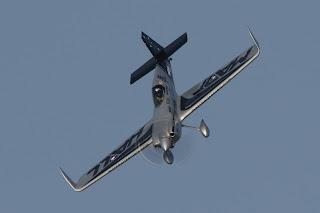 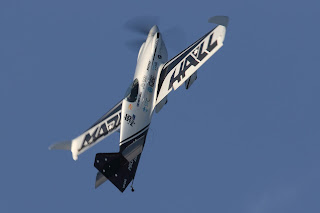 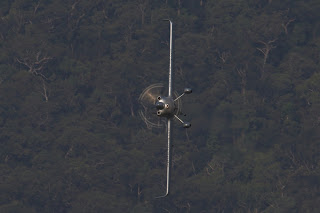 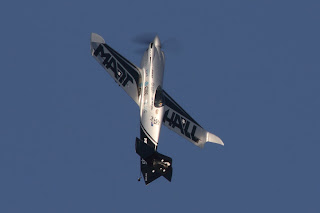 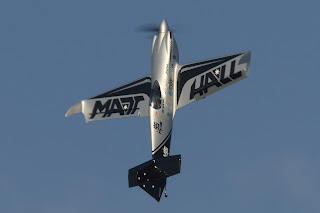 As mentioned below, VH-CQE headed up to Cairns where Matt Hall himself put on a spectacular show over the Cairns Esplanade on Friday 23 September - as shown above.
Meanwhile, also on Saturday 24 September, and further West out at Longreach Airport, Kirkhope Aviation (Victoria) Cessna 208B Grand Caravan VH-PRK arrived from Undara and Hughenden on what seems to be a closed tourist charter flight.
Brisbane-based Piper PA-31-350 VH-RPV looked to depart for Roma Airport and Archerfield at the end of a closed tourist charter flight.  It had arrived the previous day from Winton.
While an aircraft we haven't seen for a couple of years with Aero Logistics / Bayswater Road Aerial Surveys Cessna 404 Titan VH-WGS noted operating between Longreach Airport and Barcaldine Airport at various times over the last week or so.
Elsewhere, another aerial survey aircraft in the form of Dino Air (Interair) Piper PA-31 Navajo VH-XGL continues to operate local aerial survey flights out of Rockhampton Airport.
And Bundaberg-based Aero Optics (General Aviation Maintenance operated) Aero Commander 500-S VH-JAJ looked to complete a series of aerial survey flights out of Hervey Bay (Fraser Coast) Airport after returning from a stint in Far North Queensland last weekend.
Finally, also on Saturday 24 September, the familiar sight of Metro Holdings Australia (Air Link - Dubbo) Textron Aviation (Cessna) 510 Citation Mustang bizjet VH-SQV departed Hamilton Island Airport for Archerfield.  It had arrived the previous day and visited pretty much every other day over the last week.
UPDATE!  On Sunday 25 September, VH-SQV was back at Hamilton Island Airport yet again, arriving from Archerfield before later returning there but via the Sunshine Coast.
Zauner Aviation Pilatus PC-12/47E VH-FMM flew up to Hamilton Island Airport from its Albury base.
Re-registered Kelsall P/L (Aeronautics and Technology Holdings) Pilatus PC-12/45 VH-PID also arrived into Hamilton Island Airport but from its Toowoomba base via Archerfield.  It later returned down to those places.
Beech A36 Bonanza VH-PGI flew into Mackay Airport from Cooktown.  It seems to be on a tour of Far North Queensland having headed North via Charleville Airport over a week ago.
UPDATE!  On Sunday 25 September, VH-PGI departed Mackay Airport for the Sunshine Coast and then its Port Macquarie base in New South Wales.
DeGunst Transport P/L Textron (Cessna) 208 Caravan VH-NPZ flew up to around North Curtis Island from its Bundaberg Airport base and then back.
Avcair Embraer 500 Phenom 100EV bizjet VH-NJR arrived into Maryborough Airport from Brisbane.
UPDATE!  On Monday 26 September, VH-NJR departed Maryborough Airport and returned to Brisbane.
And a pair of Flight Training Adelaide (FTA) / Qantas Group Pilot Academy Diamond DA-40 Star training aircraft were noted in the Fraser Coast region with VH-YTB noted at Bundaberg Airport and VH-YTR noted at Hervey Bay (Fraser Coast) Airport while on flights out of and back to Toowoomba-Wellcamp.
All photos taken by Jonathan Williams  ©
Posted by Damian F at 8:25 PM