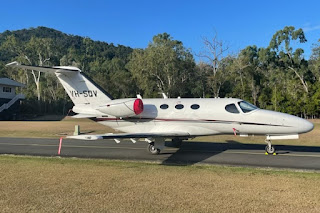 It looked to have actually flown across to Shute Harbour from Hamilton Island Airport after arriving there from Archerfield the previous day.
On Wednesday, VH-SQV then departed the Whitsunday Airport at Shute Harbour for the Gold Coast and then Archerfield.
While AirMed Australia (Metro Holdings) (New South Wales) Cessna 510 Citation Mustang bizjet VH-SQY as "Airmed 974" landed at Hervey Bay (Fraser Coast) Airport from Maitland and Grafton then departed to Archerfield.

While Agile Aviation (South Australia) new PC-12/47E VH-TCP departed Archerfield for Gatton and then up to Bundaberg Airport where it completed some airwork before then returning to Archerfield.  It had flown up to Archerfield from Adelaide the previous day.
Aerometrex Vulcanair (Partenavia) P.68C VH-CJJ departed Rockhampton Airport to complete aerial survey work around Gladstone before it looked to fly out to Emerald Airport.
And Inverted Downunder / Matt Hall Racing MX Aircraft MXS VH-CQE arrived into Rockhampton Airport from the South. 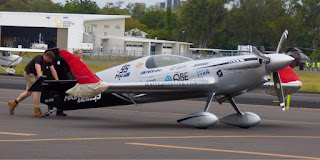 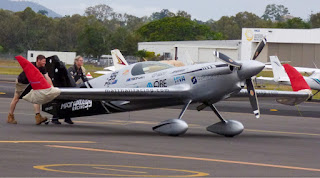 It is expected to continue up to Cairns on Thursday 22 September where Matt Hall is expected to put on a show over the Cairns Esplanade during the afternoon.
Finally, also on Wednesday 21 September, Link Airways (Corporate Air / Vee H Aviation) Metro 23 VH-VEU flew out from Brisbane to Longreach Airport and then Boulia Airport before returning to Brisbane again via Longreach Airport.

Hinterland Aviation new Cessna 208 Caravan VH-JES flew from Townsville to the Labona Station Airstrip within Adani Australia's (Bravus Mining & Resources) Carmichael Coal Mine site as HND750 before then flying across to Rockhampton Airport as HND313 for what I believe is its first ever visit to the beef capital.  VH-JES then flew back to Labona as HND330 before then flying back to Townsville again as HND750.
And Queensland Government (QGAir) Rescue (State of Queensland) Leonardo S.P.A. Helicopter (Agusta) AW139 helicopter VH-EGF popped into Emerald Airport while flying down from Townsville to Archerfield and planned maintenance.
Photos taken by Lee Holloway and Jaxson White  ©
Posted by Damian F at 8:10 PM