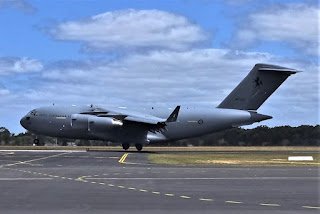 It flew up from RAAF Base Amberley to Bundy where it looked to complete at least four touch-and-go approaches.
A41-208 "Stallion 35" then flew South and returned to Amberley.
Meanwhile, also on Tuesday 4 October, Royal Australian Air Force (RAAF) Alenia C-27J Spartan transport aircraft A34-007 was noted visiting Rockhampton Airport.  It flew in from Amberley and later departed to Canberra.
And Australian Army Boeing CH-47F 'Foxtrot' Chinook helicopters A15-301 and A15-304, which were flying together as "Fatboy", arrived into Rockhampton Airport from Townsville and a bit later departed to Amberley.

Photo and video taken by Katie Cameron and Angela Tillack  ©
Posted by Damian F at 8:59 PM