It appears as though most weekday QantasLink flights between Brisbane and Rockhampton, and Brisbane and Mackay, are now being operated by Alliance Airlines Fokker F-100 aircraft.

Just in this last week - Monday 23 to Friday 27 May - F-100s VH-FKA, VH-XWM, VH-XWQ, and VH-XWT, have all visited either Rockhampton and Mackay, with 2-3 return services each day being operated from Brisbane by these aircraft.

Adam P caught VH-FKA on finals to Mackay's Runway 14 on Friday 27 May. 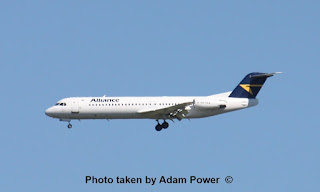 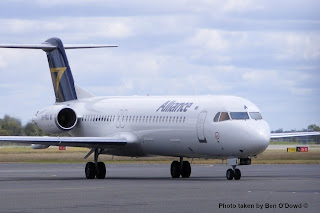 It was also interesting to note that Alliance Airlines also operated two possibly stand-alone FIFO charters from Brisbane to Emerald and return this week.

This last service didn't use the 'usual' flight numbers to Emerald as was the case on the Monday, prompting some speculation that this might have been a service flown on behalf of QantasLink. We await further information!!
Posted by Damian F at 5:40 PM