Most of these special movements have already been posted last week, but Adam P provides a couple of lovely photos from Mackay Airport of Virgin Australia's B737-800 VH-YFC, which wears the new Virgin Australia colour scheme. 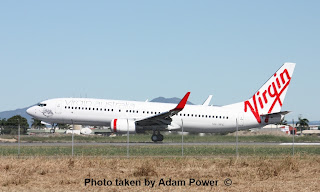 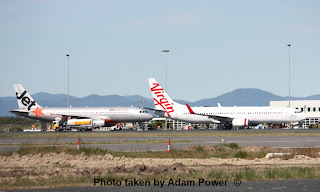 This aircraft touched down twice this week in Mackay, with Adam P caturing its arrival on Friday 27 May.

VH-YFC was also noted in Rockhampton twice this week as well.

Other notable Virgin Australia aicraft in the CQ region included:

VH-VUY - with AFL stickers - noted at Mackay early in the week (as shown below), and then Proserpine / Whitsunday Coast Airport on Thursday 26 May. 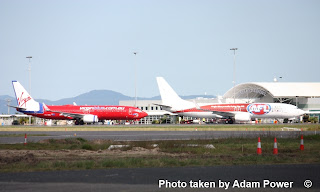 VH-YFE - which is Virgin Australia's newest aircraft - and still in an all white colour scheme - was noted at Mackay both on Friday 27 May and then on Saturday 28 May. A recent picture from Brisbane Airport is below. 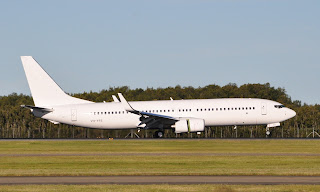 Thank you to our followers and spotters for providing this information and pictures!
Posted by Damian F at 5:57 AM