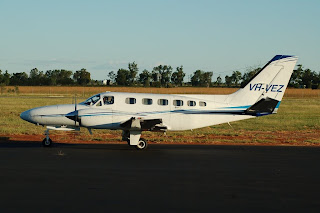 A couple of weeks ago, I was at Brisbane Airport and noted Cessna 441 VH-VEZ of Corporate Air / Vee H Aviation in Canberra, depart on a fly-in fly-out charter to Springsure Aerodrome.

Springsure is about 70km South of Emerald and is a hub for several coal mines such as the Minerva Mine. Presently, VH-VEZ operates to Springsure once a week.

Rolleston, which is about 70km South-East of Springsure, is also close to several mines, and fly-in fly-out operations are also operated by VH-VEZ about 2-3 times each week from Brisbane - on Monday, Thursday and Friday.

Both Springsure and Rolleston are prospering as a result of these mines and significant exploration is ongoing in the district. The area is also a staging point for expeditions to the Carnarvon National Park.

VH-VEZ is pictured above operating a charter in Emerald Airport last year. Thanks to Lloyd F in Brisbane for the information in this post!
Posted by Damian F at 8:12 PM