In a treat for spotters, Virgin Australia operated two of their newer Boeing B737-800 aircraft into Mackay from Brisbane on Monday 23 May.

Firstly, VH-VUY, which is pictured below in Sydney, and still wearing its colourful AFL promotional stickers, operated the DJ605 service from Brisbane to Mackay this morning. 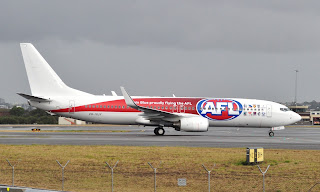 Unfortunately though, due to the wet weather in Mackay, it was unable to land, and turned back to Brisbane. Early this afternoon, it then left Brisbane, this time as DJ8605, as an additional flight to Mackay. As far as we can tell, VH-VUY is still parked at Mackay. 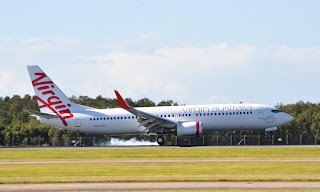 This service was successful in landing at Mackay, and VH-YFC later returned to Brisbane on schedule as DJ610.

And in late news, VH-YFC has just departed Brisbane for Rockhampton as DJ1251.
Posted by Damian F at 7:23 PM