Late on Tuesday 1 January, Hevilift Australia (Fixed Wing Division) ATR 72-500 VH-FVH entered service with the airline and operated a closed Fly-in Fly-out (FIFO) charter flight in and out of Middlemount Aerodrome as HT773/774 from and back to Brisbane. 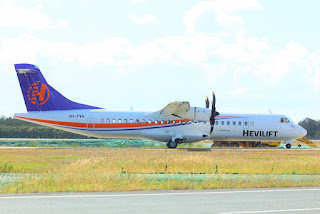 The former Virgin Australia ATR 72 had returned to Australia from storage at Nelson, New Zealand in October last year and flew back into Brisbane from Cairns in early December following a period of maintenance and re-painting.  VH-FVH completed a local test flight around Brisbane on Friday 21 December.

VH-FVH then completed another FIFO charter flight on Wednesday 2 January, again flying in and out of Middlemount Aerodrome but as HT771/772 again from and back to Brisbane - where it is pictured above.

Of interest, Hevilift has also operated fellow former Virgin Australia ATR 72-500 VH-FVM which completed its last FIFO charter flight in and out of Moranbah Airport last Wednesday 26 December.  It was also interesting to note that VH-FVM completed a Brisbane to Moranbah Airport then Cairns flight last Monday 24 December before it returned to Brisbane. 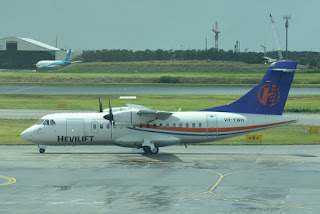 FIFO charter flights from Brisbane and the Sunshine Coast to Biloela / Thangool Airport seem to have been placed on hold.