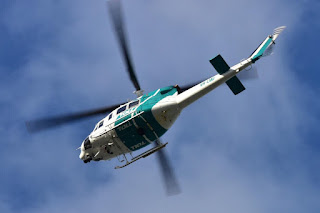 VH-LWI was noted flying into Gladstone Airport from Redcliffe.  After taking on fuel, it continued to Mackay Airport for another fuel stop before continuing to Townsville where it is pictured above.

VH-LWI is possibly in Townsville to replace Queensland Government (QGAir) Rescue Bell 412EP helicopter VH-ESB which was noted ferrying South all the way to Mudgee in New South Wales during the middle part of December - see Blog post below.

Of interest, VH-LWI is no stranger to airborne medical retrieval services having operated with Careflight in New South Wales as "Careflight 5".

It appears that VH-LWI may have been at Redcliffe since early 2018 and has perhaps undergone heavy maintenance.