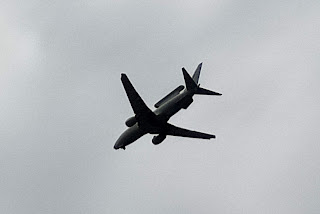 A30-005 was flying as "Wedgetail 05" and reportedly flew up to Hervey Bay from RAAF Base Williamtown near Newcastle in New South Wales via airwork at the Gold Coast.  After completing its airwork at Hervey Bay Airport, A30-005 was noted flying back towards the South.

Of interest, the last three days of this week have seen two of the six No. 2 Squadron E-7A Wedgetails - A30-005 and A30-002 - completing flights out of RAAF Base Williamtown.

Sincere thanks to visiting plane spotter Matthew C for allowing us to share his photo of the Wedgetail overhead Hervey Bay!