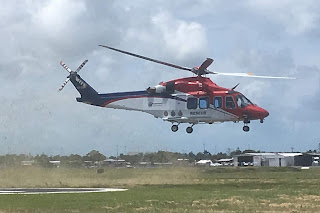 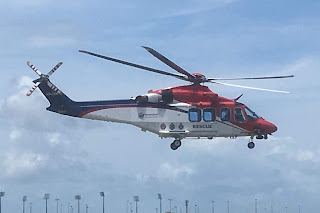 VH-ESH is pictured above departing Mackay Airport for Townsville.

While VH-ESH has been operating out of Archerfield around the South East corner in recent days as "Rescue 500", it seems to heading to Far North Queensland - possibly to Cairns - to replace fellow QGAir Rescue AW139 VH-EZJ which has been operating in Far North Queensland as "Rescue 510".  I presume that VH-EZJ will ferry South in the coming days to Archerfield where it will undergo planned maintenance.

Finally, as also mentioned previously, a pair of brand new Leonardo S.P.A. Helicopters (Agusta) AW139 - VH-EGF and VH-EGK - have recently been registered to QGAir (State of Queensland) and are believed to be hangared and being prepared for service at Archerfield.  These should possibly join the QGAir fleet soon.