A bushfire in the Southern corner of Berserker Ranges saw some fire fighting aircraft and helicopters operate out of Rockhampton Airport on Thursday 26 November. 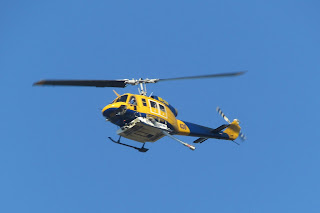 McDermott Aviation / Heli-Lift Australia Helicopters Bell Textron Helicopter 214B-1 Big Lifter helicopter VH-SEK "Helitak 430" arrived from the South and completed water drops on the fire before being photographed (above) heading to Rockhampton Airport for fuel.
VH-SEK "Helitak 430" eventually departed the area for Bundaberg Airport.
It also appeared that Emerald-based Heli Central Williams Helicopter Corp (Bell) UH-1H Huey VH-UHH "Helitak 468" arrived into Rockhampton Airport from Mackay Airport where it has been based of late.  However, it seems that VH-UHH "Helitak 468" did not see any action and remained parked at Rocky.
And R-Mach Aviation PZL Warszawa-Okecie M-18B Dromader VH-MDR "Bomber 402" also completed several water drops on the fire, flying out of and back to Rockhampton Airport several times during the day and evening.
Meanwhile, also on Thursday 26 November, Agair Logistics P/L Rockwell Turbo Commander 690B VH-LVG "Birddog 273" flew up from Bundaberg Airport to provide support to these helicopters and aircraft.  It landed at Rockhampton Airport for a short time before then returning to Bundy.
Finally, not bushire related, but Roma Airport based M. I. Helicopters Agusta (Bell) 206B VH-JZB was noted in the area completing pipeline inspections.  It then returned to the South-East.
Photos taken by Trevor Hardsman  ©
Posted by Damian F at 8:40 PM