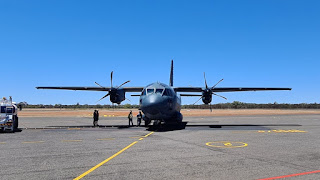 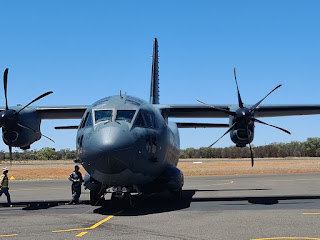 The exact movements of the RAAF’s 35 Squadron C-27J Spartan battlefield airlifter are not known but it appeared to be flying in parts of New South Wales and Queensland and was noted to be flying as "Wallaby 06".
Meanwhile, also on Monday 2 November,  RAAF Boeing B737-7ES / E-7A Wedgetail Airborne Early Warning & Control (AEW&C) aircraft A30-003 "Wedgetail 04" was noted completing airwork including three missed approaches at Hervey Bay (Fraser Coast) Airport.  It looked to fly up from RAAF Base Williamtown and then return there via more airwork at RAAF Base Richmond.
Sincere thanks to local plane spotter Zac F for taking the time to capture and send through these great photos!
All photos taken by Zac Fitzgerald  ©️
Posted by Damian F at 8:52 PM