Interesting to see that late on Thursday 12 November, locally-based Israel Aircraft Industries (IAI) 1124A Westwind II bizjet VH-IER was noted departing its Maryborough Airport Base on a short flight to Bundaberg Airport before it then flew up to Townsville. 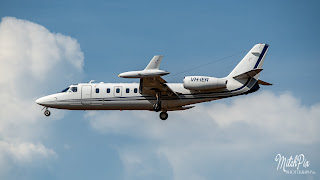 After spending the night, VH-IER then departed Townsville on Friday 13 November for Darwin in the Northern Territory (pictured above) where it is believed to have completed a medical evacuation flight.
UPDATE!  On Saturday 14 November, VH-IER departed Darwin bound for Maryborough Airport but returned to Darwin.
UPDATE!  On Sunday 15 November, VH-IER returned to Maryborough Airport from Darwin.

As we've mentioned previously, VH-IER - which as suggested by its 'InflightER' titles - is fully kitted out as a specialist medical retrieval and evacuation (med-evac) aircraft. In fact the name worn by the aircraft - 'InflightER' - is literally short for 'InFlight Emergency Room'.

VH-IER is also part of Australia Air Medical, whose mission is to be known as the safest, most ethical and best value jet aeromedical retrieval services in the Australasian and Asia Pacific marketplace.

Sincere thanks to local plane spotter Rowena B for taking the time to capture and send through this great photo and video!