Former Jetstar Airways Airbus A320 VH-JQX Now in Perth with QantasLink / Network Aviation - Plus Some ex-Jetstar Asia A320s Coming too!

I was interested to note that former Jetstar Airways Airbus A320 VH-JQX recently ferried into Perth in Western Australia and has become the fifth A320 to join the fleet of fellow Qantas subsidiary Network Aviation. The A320s look to be primarily used on Network Aviation’s Fly-in Fly-out (FIFO) charter flight routes. 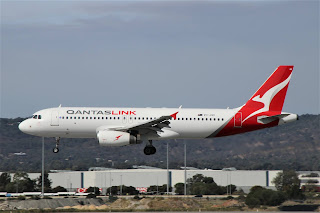 VH-JQX (MSN 2197) was delivered to Jetstar in August 2004 and actually completed its first flight for the airline operating to Hamilton Island Airport from and back to Melbourne (Tullamarine) on Sunday 15 August 2004.
VH-JQX also underwent a livery 'update' into the latest Jetstar Airways livery and recently was adorned in stickers promoting the well-known rental car company 'Hertz'. 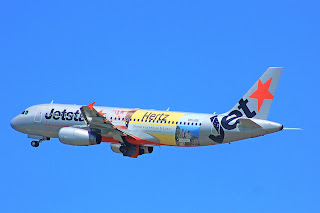 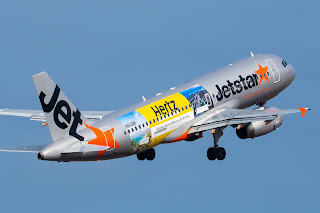 VH-JQX operated its last Jetstar revenue service on Thursday 26 March and looked to make its final visit to the region operating as JST846/849 from Sydney to Hamilton Island Airport and only on Saturday 21 March.

After some time in storage at Sydney, on Thursday 6 August, VH-JQX was ferried from there to Melbourne (Tullamarine).  On Wednesday 26 August, VH-JQX then looked to ferry from Melbourne (Tullamarine) to Singapore (Seletar) via Darwin for planned maintenance and re-painting into the Qantas / QantasLink 'Silver Roo' livery, becoming the fifth A320 to wear this livery, along with VH-VQS, VH-VQU,VH-JQL and VH-JQG, all of which have taken up operations in Perth with Network Aviation since 2018.

VH-JQX was subsequently ferried from Seletar to Perth (Western Australia), arriving on Friday 16 October. VH-JQX operated its first service with QantasLink / Network Aviation on Monday 26 October when it operated as NWK2642 from Perth to Karratha.
Meanwhile, also recently arriving into Perth from Seletar is another Airbus A320 for QantasLink / Network Aviation in the form of VH-UVO.  It touched down in the Western Australian capital on Wednesday 28 October.
VH-UVO (MSN 2453) has previously operated with Jetstar Airways in Australia as VH-JQH and most recently with Jetstar Asia Airways as 9V-JSF being a frequent international visitor to Perth.
UPDATE!  On Wednesday 11 November, VH-UVO, named 'Mottlecah', entered service with with QantasLink / Network Aviation when it operated as NWK2640 from Perth to Karratha.
VH-UVO is the first of five ex-Jetstar Asia airframes that are due to be delivered to QantasLink / Network Aviation.
UPDATES!  VH-UVP (ex 9V-JSH/VH-VQA) named 'Silver Hakea' arrived Thursday 24 December.  VH-UVK (ex 9V-JSA) named 'Geraldton Wax' arrived Wednesday 13 January 2021.  VH-UVJ (ex 9V-JSB) named '???' arrived Friday 2 April 2021.  VH-UVQ (ex 9V-JSE/VH-JQW/VH-XJE) named 'Jarrah' arrived Tuesday 1 June 2021.
Network Aviation operates their Airbus A320s in a 180-seat all-economy configuration on intra-Western Australia charter services. They complement the airline's fleet of 17 Fokker F-100 jets.

Network Aviation (Network) is a West Australian based company that has been providing air charter services since 1998. Over the last 20 years Network Aviation has grown significantly, and in 2011 became a wholly owned subsidiary of the Qantas Group.

Network operates the Airbus A320-200 and has the largest fleet of Fokker 100’s at Perth Airport operating over 300 weekly flights to destinations throughout WA and beyond. Network caters for the resources industry Fly-in, Fly-out (FIFO), regular airline services on behalf of Qantas, corporate charter and routine or emergency freight.

Photos taken by David Rowcroft, Tony Haynes and Lloyd Fox  ©
Posted by Damian F at 9:51 AM