Late on Wednesday 11 August, and with the Combined Military Exercise Talisman Sabre 2021 (TS21) becoming a distant memory, the final lot of American personnel and equipment was flown out of Australia on board Omni Air International Boeing B767-33A(ER) N351AX which touched down at Rockhampton Airport as OAE7997 from Guam. 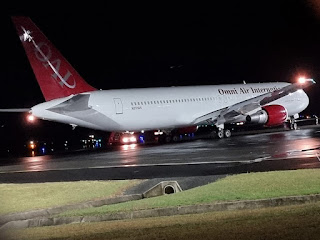 As usual, the B767 touched down and then parked on Gate 6 on the Southern end of the Rockhampton Airport parking apron.
Soon after, a full load of personnel and equipment was loaded on the aircraft.  N351AX departed a couple of hours after its arrival and returned to Guam (Andersen AFB), before continuing to Kadena Air Base in Japan flying again as OAE7997.
Photo taken by Bec Parry  ©
Posted by Damian F at 6:30 AM