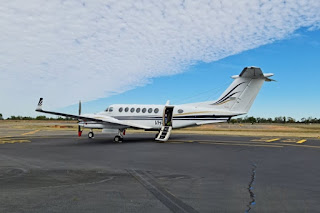 It looked to arrive from and then later depart back to the Gold Coast via Moree.

While Sunshine Coast-based The Recreational Flying Company Cessna 421C Golden Eagle VH-UTC popped into Biloela / Thangool Airport from Gympie before it then departed to Ashford in Northern New South Wales.
UPDATE!  On Saturday 7 August, VH-UTC returned to Bilo from Ashford before then flying back to Gympie.
Finally, also on Friday 6 August, Springsure-based Cessna 182Q VH-WPG flew from there to Rockhampton Airport when it blew a tyre a landing at Rocky.  It was later removed from the cross-Runway 04/22.
UPDATE!  On Sunday 7 August, VH-WPG returned to Springsure from Rockhampton Airport.
Photo taken by 'AC'  ©
Posted by Damian F at 9:01 PM