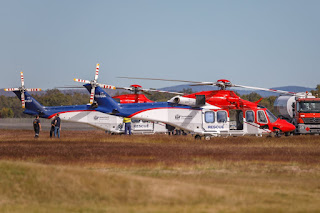 QGAir Rescue Leonardo S.P.A. Helicopters (Agusta) AW139 VH-EGK flew up from Archerfield to Rocky and then to Townsville.
While QGAir Rescue Agusta AW139 helicopter VH-EZJ flew down from Townsville to Rocky and then to Archerfield where it is believed to be going to undergo planned maintenance.  VH-EZJ has been operating out of Townsville of late, flying as "Rescue 521" on medical retrieval flights around the region - including as far South at Bowen, Proserpine and Mackay.
As we have mentioned previously, this is part of the 'rotational system' the service utilises to ensure the even distribution of flying hours on each of the QGAir Rescue helicopters.  This system avoids the need to have multiple helicopters offline for simultaneous scheduled maintenance.
All photos taken by Steve Vit  ©
Posted by Damian F at 8:45 PM