On Saturday 28 August, Queensland Government (QGAir) Rescue (State of Queensland) Agusta AW139 helicopter VH-ESH was photographed as it arrived into Rockhampton Airport while ferrying South from Townsville to Archerfield. 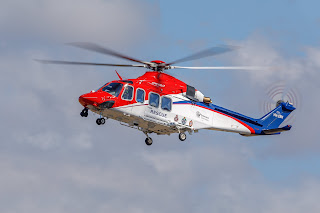 VH-ESH has operating out of Townsville Airport in recent months and so it is presumed that it has ferried from Townsville to Archerfield for planned maintenance.

Sincere thanks to local photographer Steve V for allowing us to share this great photo!