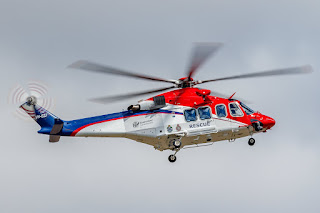 It originally departed from Archerfield and was spotted arriving into Rockhampton Airport where it refuelled before continuing to Townsville and then Cairns.
VH-EZJ looks to have spent the previous couple of weeks undergoing planned maintenance after it had originally flown South from Townsville at the start of the month.
As we have mentioned previously, this is part of the 'rotational system' the service utilises to ensure the even distribution of flying hours on each of the QGAir Rescue helicopters.  This system avoids the need to have multiple helicopters offline for simultaneous scheduled maintenance.
Photo taken by Steve Vit  ©
Posted by Damian F at 8:40 PM