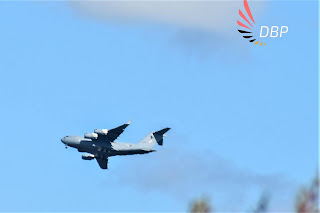 The Globemaster initially looked to depart RAAF Base Amberley and fly up to Bundaberg Airport where it was spotted completing a pair of missed approaches.  It then flew at low level from out around Gayndah and up to Mackay Airport where it completed another pair of missed approaches.
A41-207 then flew across at flight levels to Darwin.  It later returned to Amberley.
A41-207 was noted flying as "Stallion 56" during all of its flights.

Photo and video taken by Dan B and John Chalkley  ©
Posted by Damian F at 5:48 PM