On Friday 8 April, HNZ Australia Airbus Helicopters MBB-BK117 D-2 H145 chopper VH-ZRU was spotted wrapped up and ready for export in their hangar at Mackay Airport. 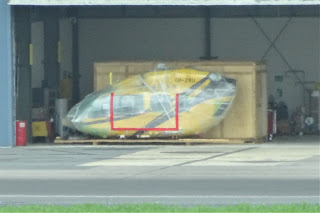 It is believed that fellow HNZ Australia Airbus Helicopters MBB-BK117 D-2 H145 chopper VH-ZRP is contained in the box behind its sistership.
It seems that HNZ Australia has now lost its contract to provide transport to marine pilots etc to the Blossom Banks Anchorage out of and back to Mackay Airport.
HNZ Australia's two bright yellow choppers - VH-ZRP and VH-ZRU - started flying out of Mackay Airport only in mid-2019.
At the time, these two brand new-production choppers had only recently arrived in Australia from Germany and were registered in mid-April in 2019.  VH-ZRU (c/n 20179) is ex-D-HADI(10), while VH-ZRP (c/n 20149) is ex-D-HNUB.
HNZ (Helicopters New Zealand) is headquartered in Nelson, New Zealand and operates helicopters from 8 locations throughout New Zealand, Australia, South East Asia and Antarctica. They Operate in support of a range of multi-national companies and government agencies, including onshore and offshore oil & gas, mineral exploration, marine pilot transfer services, military support, charter services, utilities and flight training.
To find out more about HNZ Australia visit their website:  http://www.hnzglobal.com/
Photos taken by 'AC' and 'JM'  ©
Posted by Damian F at 9:58 AM