Over the weekend, I noted a couple of commercial aircraft to call into Hamilton Island Airport wearing special colours!

Of particular interest, on Sunday 11 January, Jetstar Airways Airbus A320 VH-VGF operated the JST860/863 service from and back to Melbourne (Tullamarine).  As it happens, I'm spending a couple of nights at Melbourne and managed to catch VH-VGF arriving at Tullamarine Airport. 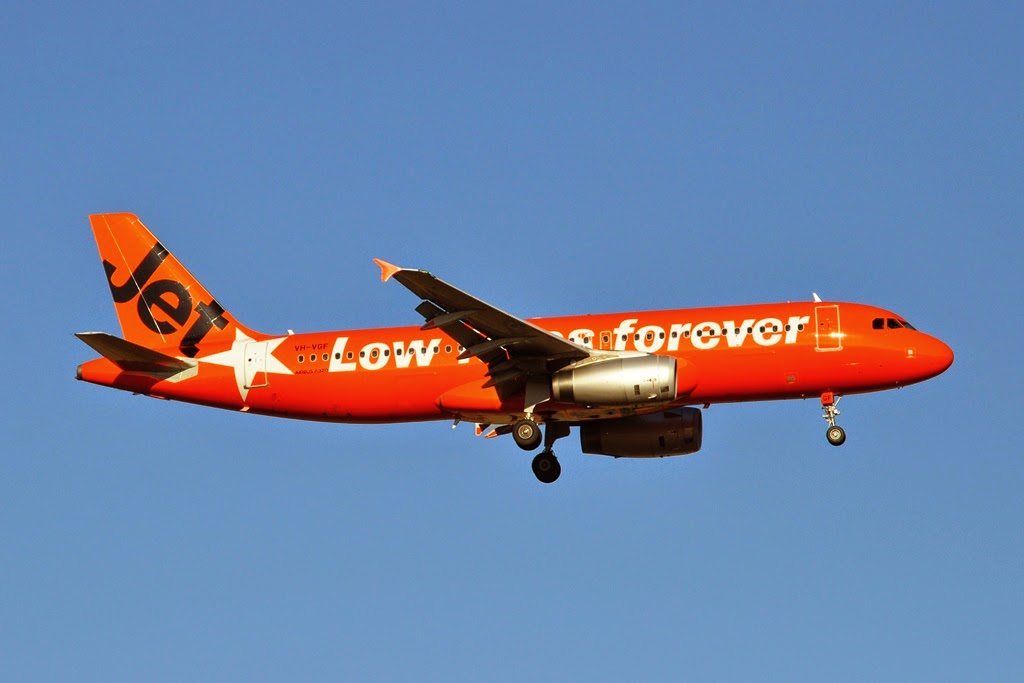 VH-VGF wears a special orange colour scheme (or jaffa, as has been described on other forums) celebrating Jetstar's 10 years of service in 2014.  As shown, the starboard side of the fuselage features text saying 'Low fares forever', while the port side has the phrase '#jetstargeneration' to signify the generation of travellers who have taken advantage of the low fares Jetstar has brought to the Australian market.

Also on Sunday, Qantas again operated Boeing B737-800 VH-VZO into Hamo on its scheduled QFA866/867 service from and back to Sydney.  VH-VZO wears stickers promoting the Prostate Cancer Foundation of Australia.

Meanwhile, not necessarily special colours, but Virgin Australia Boeing B737-800 VH-VOT was also noted calling into Hamilton Island Airport on Sunday 11 January.  VH-VOT has recently been re-painted into the new Virgin livery.

And finally on Saturday 10 January, Virgin Australia Boeing B737-800 VH-YFR called into Hamo operating the VOZ1281/1280 service from and back to Brisbane.

Certainly a colourful weekend on Hamo!
Posted by Damian F at 8:51 AM