It looks like the highlight of the day on Tuesday 10 July was at Clermont Aerodrome with NetJets Cessna 501 Citation SP VH-FUM visiting mid-morning.  The cute little bizjet arrived from and departed back to Deniliquin in New South Wales, and is registered to Australasian Jet.  A little later, another Australasian Jet aircraft - Beech B200 King Air VH-ZMP - is believed to have called into Clermont Aerodrome as well. 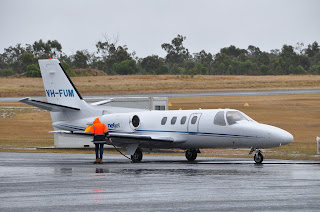 You may notice in the photo above that the weather in Central Queensland is not great again - in fact with Clermont receiving around 60mm of rain in 24 hours, some of the Skytrans Dash-8 fly-in fly-out (FIFO) charters scheduled to arrive and depart at Clermont Aerodrome in the morning were diverted to Emerald.  It appears these then departed to Brisbane direct.

There were other disruptions for both passengers flying in and out of Moranbah Airport.  As was the case a few weeks ago, on Tuesday 10 July, I believe no aircraft managed to land at the Airport during the day.  Several QantasLink RPT and FIFO flights from Brisbane to Moranbah were noted diverting to Mackay Airport, while others flew directly from Brisbane to Mackay using 'strange' flight numbers.  Information suggests that some of these affected aircraft - VH-QOW VH-QOE, VH-QOT, and VH-QOV - then 'positioned' back to Brisbane from Mackay.
Posted by Damian F at 6:22 PM