Recently, we travelled to Rockhampton Airport and manage to catch up with the crew at the resident RACQ Capricorn Helicopter Rescue Service (CHRS), which operates out of their hangar and building facilities on Canoona Road at Rockhampton Airport. 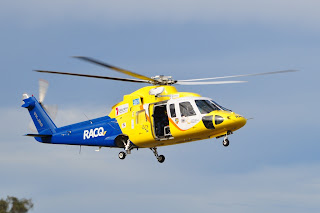 We made contact with one of the flight crew members by the name of Rob. The interesting position Rob holds with the company is very diverse - he is classified as Flight Crew, however Rob is not a registered pilot as such. He does though, sit up front with the lone pilot, and assists with navigation among other flying duties. During rescues, he operates the winch in general recovering tasks, and he also lends-a-hand to the on board medical staff when they require assistance.

An example of how Rob helps the pilot is when navigating in restricted terrain like bushland, Rob will open the door, pop his out and direct the pilot. While the pilot remains flying the helicopter, Rob is the one who actually has control (in a verbal sense) giving directions. When the restricted airspace has been successfully navigated - the pilot then resumes full command.

The helicopter operated by the Capricorn Helicopter Rescue Service is VH-JRD which is a 1981-build Sikorsky S-76A helicopter. The helicopter is owned by Jayrow Helicopters in Victoria, and despite its age, the Sikorsky is a immaculately maintained piece of machinery as with the facilities that it calls home.

This helicopter is an American built twin engine Instrument Flight Rules (IFR) machine, which has an overall aircraft size (rotors turning) of 13.46m, seating up to five passengers, and accommodating a maximum of two stretchers. As shown below, the helicopter has a maximum range (without refuel) of up to 300nm, with a normal cruising speed of up to 130kts. 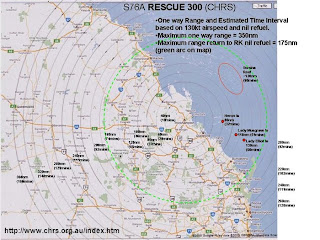 Rob commented the VH-JRD has been configured to satisfy multiple roles and not just the job as an aerial ambulance.

The onboard medical facilities can readily be removed to allow sufficient space for search and rescue duties, which can also include the requirement to uplift a decent size life-raft. The Capricorn Helicopter Rescue Service chopper is also often called upon to assist law enforcement agencies to assist in such tasks as searching for illegal crops from the air; or dispatching officers onto the ground. There is also the limited capacity to assist fire-fighters.

To operate the RACQ Capricorn Helicopter Rescue Service, 50% of the required funding comes from the Government, and 50% is funded through donations and proceeds from the public. The service deeply appreciates all fundraising efforts, and were extremely appreciative of the recent donation from the Creed family after the Old Station Fly-in at Raglan in May this year.

We would like to thank all the staff at the Capricorn Helicopter Rescue Service for their help. They were all extremely helpful, inviting and willing to show him around. Their website can be found HERE.
Posted by Damian F at 8:04 AM