Spotted in the skies above Rockhampton on Thursday 3 December was Papua New Guinea (PNG) based Pacific Helicopters Bell 212 P2-PAN. 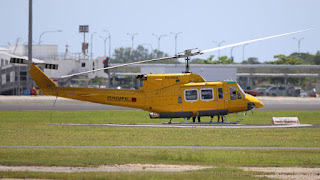 It is unclear if the big Bell huey actually landed at Rockhampton however it was spotted flying over Rocky at a low level suggesting that it may have called in for fuel while heading North.

The brilliant Far North Queensland Skies Blog captured a photo of P2-PAN parked at Cairns Airport shortly after it arrived from the South on Friday 4 December.  It has since departed further to the North.